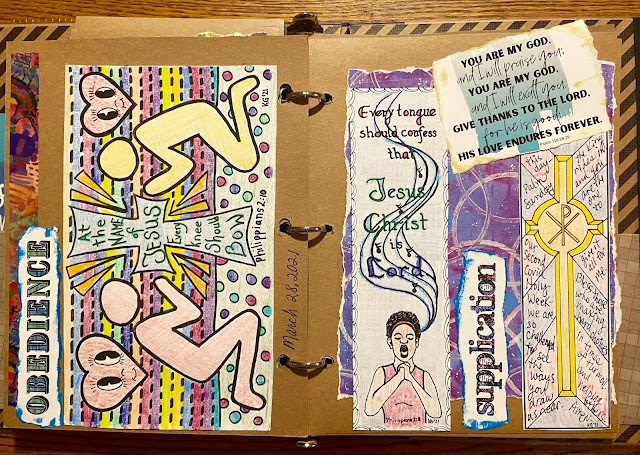 It's is amazing to think about the servant heart of Jesus,

who took on the form of a human to be one of us.

He "humbled himself by becoming obedient

to the point of death, even death on a cross."

God rewarded this and exalted Jesus.

He "bestowed on him the name this is above every name,

so that at the name of Jesus every knee

should bow in heaven and on earth and under the earth,

and every tongue confess that Jesus Christ

is Lord,  to the glory of God the Father."

This epistle reading for Palm Sunday

shows that Jesus did not cling to the privileges of deity,

sought no reputation and became something very lowly,

His Father then rewarded Jesus with the honor

that no one else has had or will ever have.

All creation is to acknowledge

the power and work of Jesus.

And Jesus returned to heaven with more

than He had when He left heaven.

The recognition now stood among men

of who He was and the worship He deserved.

May our hearts honor Jesus

and Give Glory to God for sending His son.

Worship into the Week Printables 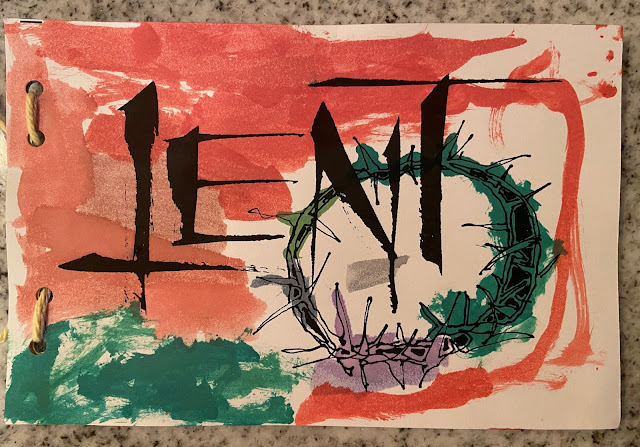 A watercolor Holy Week journey for a first grader. 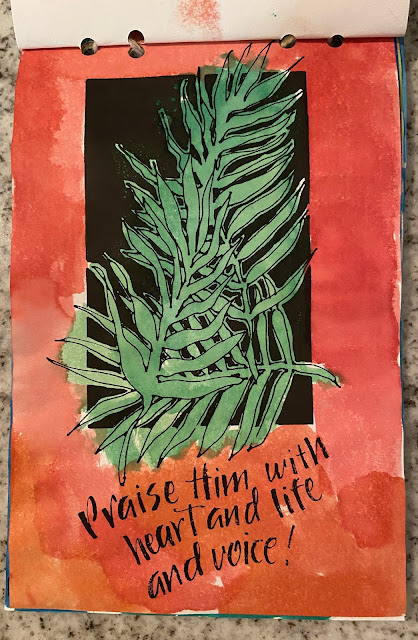 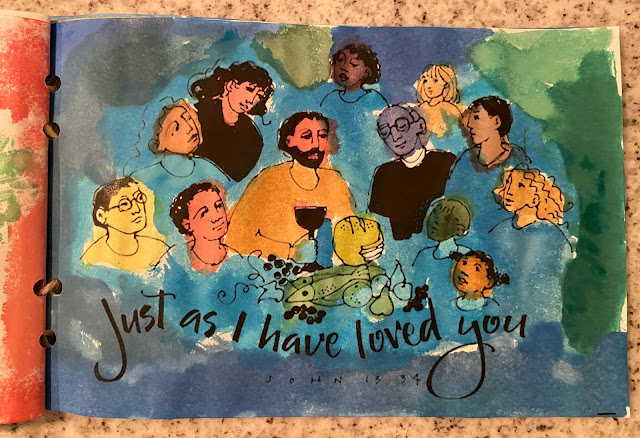 She thought they would be perfect base

for young students to add their own touch. 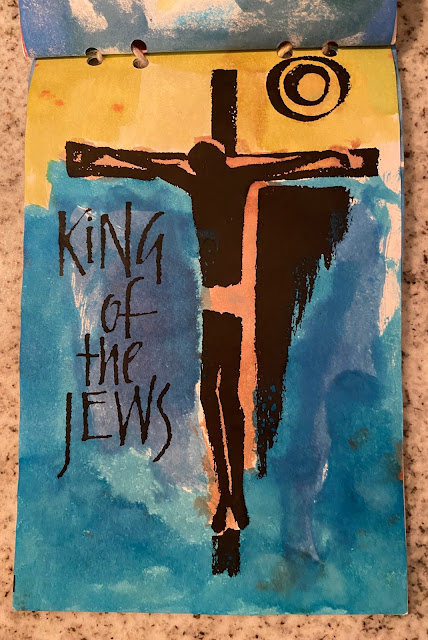 Oldest grandson Griffin, (Jessica's nephew)
is in her class
and this is his book. 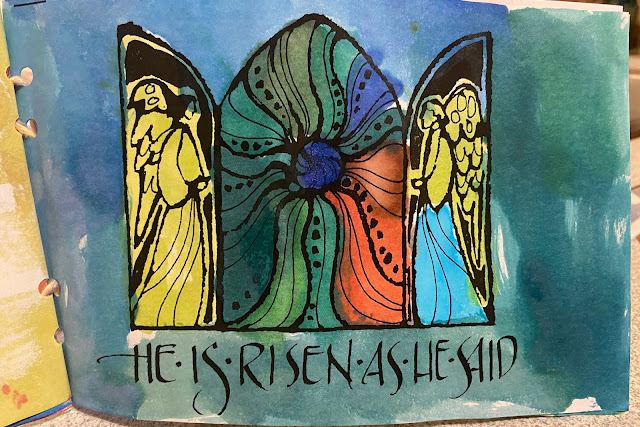 Griffin loves to tell the story using his book. 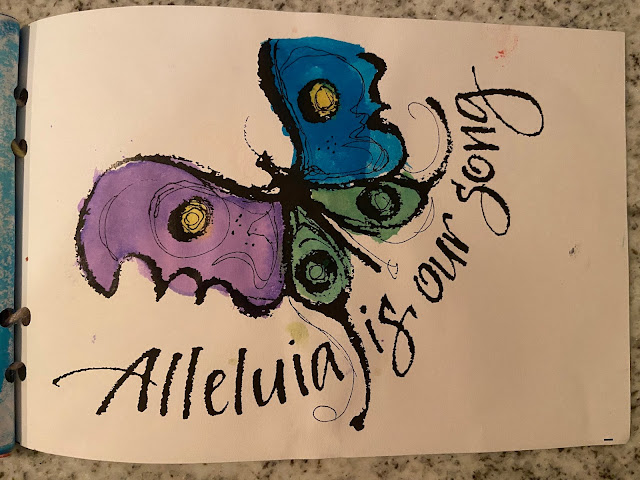 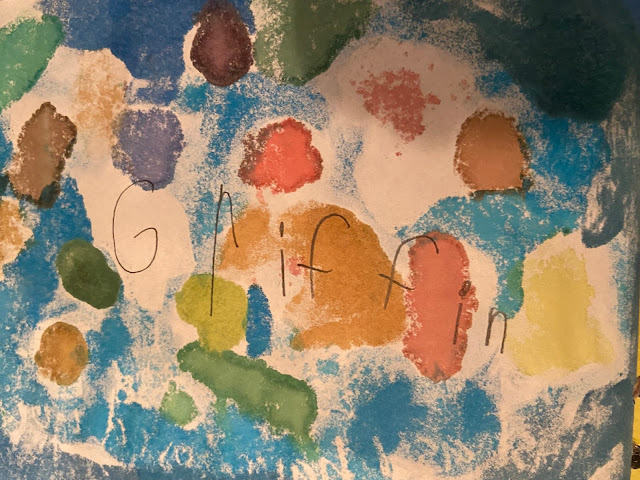 Jessica designed this book using images
from Visual Faith Ministry at
www.visualfaithmin.org
Posted by Constance at 3/27/2021 11:55:00 PM No comments:

Worship into the Week- High Priest 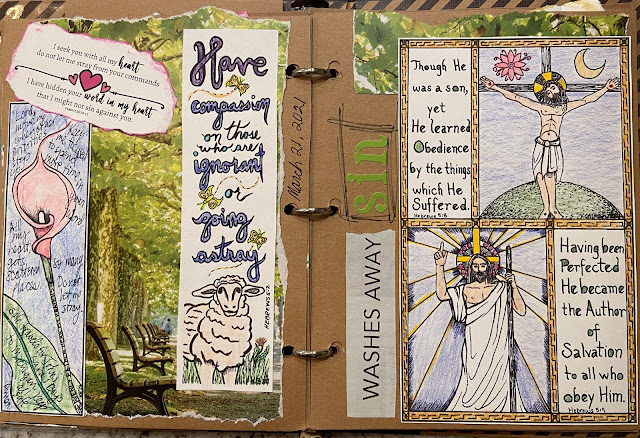 Worship into the Week
Jesus the Great High Priest
Hebrews 5:1-9
Here we hear again that Jesus can understand
our earthly challenges since he experienced these
temptations and weaknesses himself.
A human high priest must be able to have compassion
for his people,
and because Jesus was fully human
he could accept this role.
He is the author and perfecter of our faith.
verse 7-8  Speaks to the Prayers and Supplications
that Jesus offered up to His Father.
He was heard because of his reverance,
but the cup of death couldn't be removed from him.
"The ancient Greek word for supplications is hiketeria.
This word means "an olive branch wrapped in wool"
because that is what the ancient Greek held
and waved to express their desperate parade read desire.
Significantly, this supplication of Jesus took place
in a garden of olives-
and He supplies the "wool," being the Lamb of God."
Enduring Word Commentary
I think I really like that reference
for the term supplication,
it brings new meaning to my time
in the Garden of Gethsemane on the Mount of Olives.
Supplies:
Visual Church Year Printables
children-s-bulletin-hebrews-5-1-10-3-21-21
Worship into the Week Printables
Magazine Cutouts
Prisma Colored pencils
Posted by Constance at 3/24/2021 11:08:00 PM No comments:

Worship into the Week- By Grace 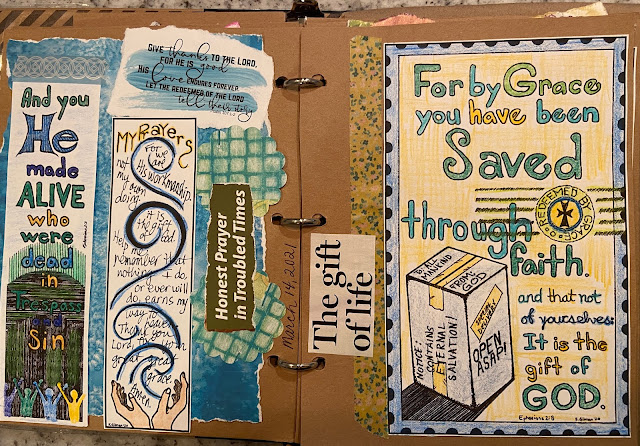 Worship into the Week-

By Grace Through Faith

God is so rich in mercy.

We can't do anything to earn

or win our way to heaven.

"For by grace you have been saved through faith."

A simple and straightforward invitation.

A life changing acceptance on my part. 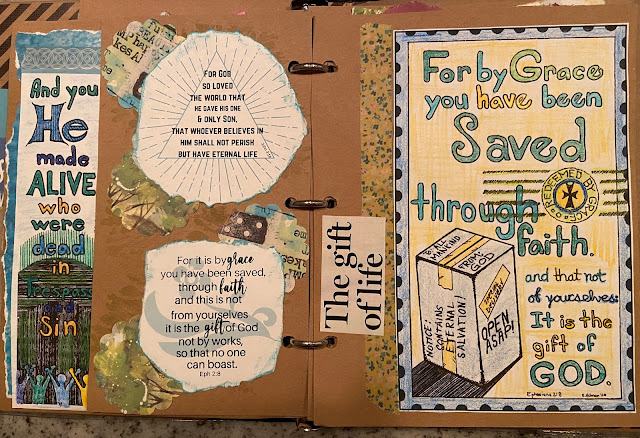 Worship into the Week Subscription 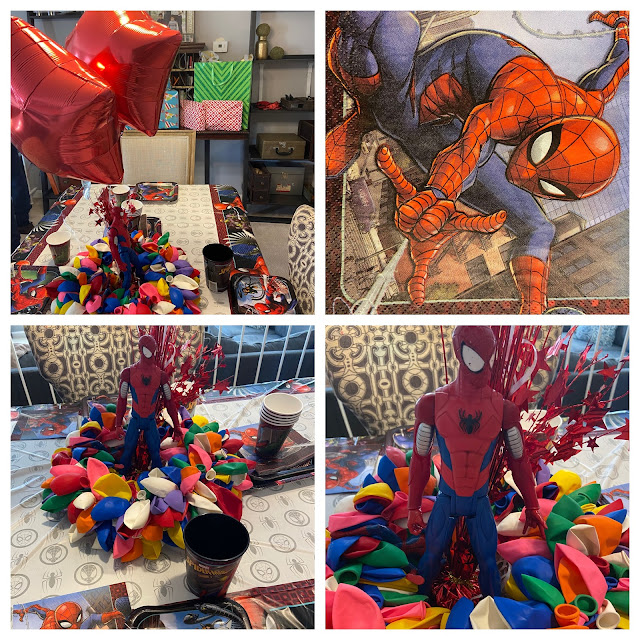 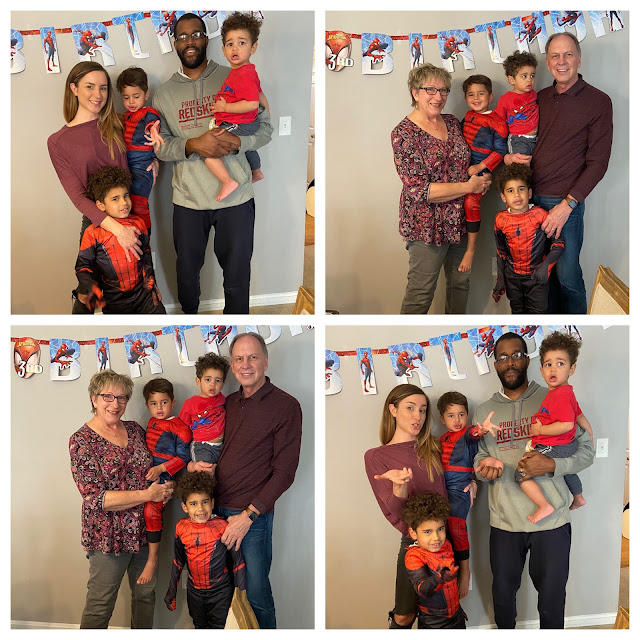 Sunday afternoon after naps is a
great time to for some Spidey-SHUSSSS!
A favorite is to listen to the Michael Buble
Spiderman theme song.
Papa and Gigi loved to attend the party.
Then the dancing begins. 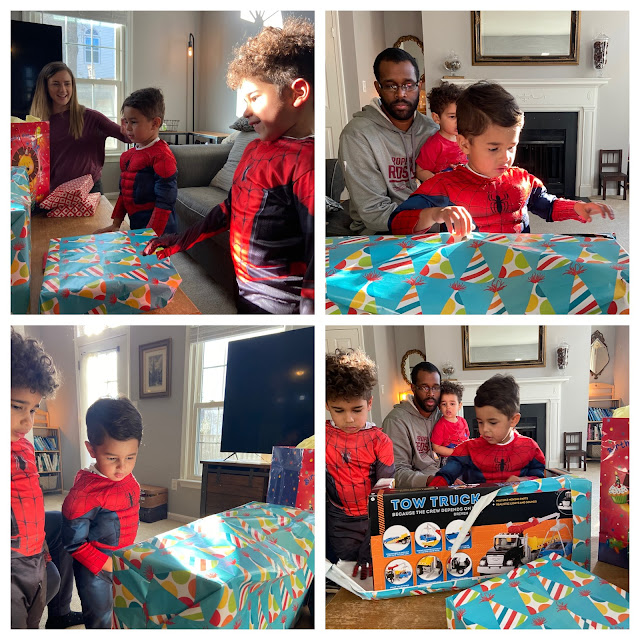 Time for gift opening. There was a tow truck
and the next size up for a Spider suit. 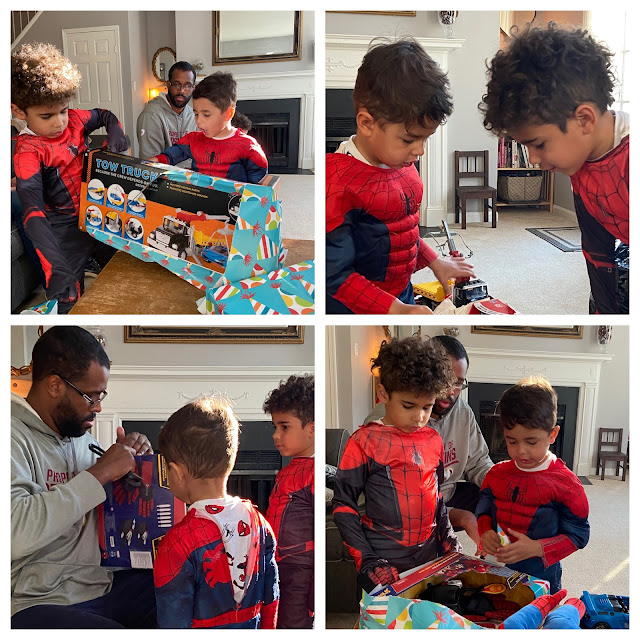 Brothers all wore the right attire for the day. 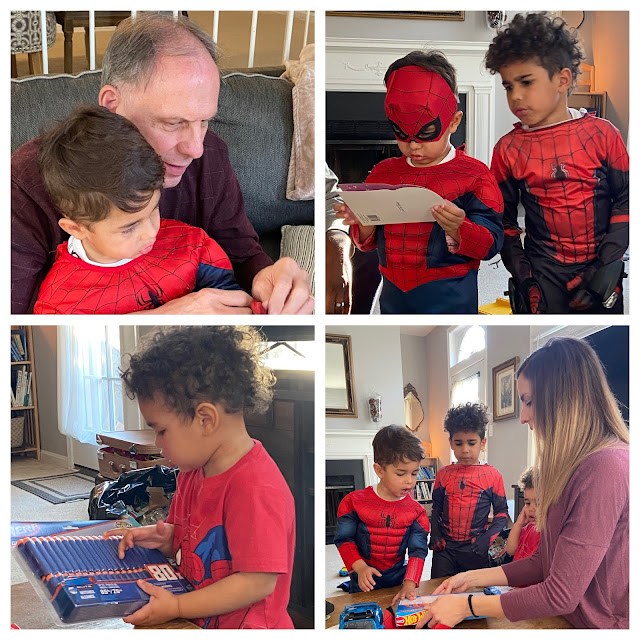 Little Jonah found something that caught his eye. 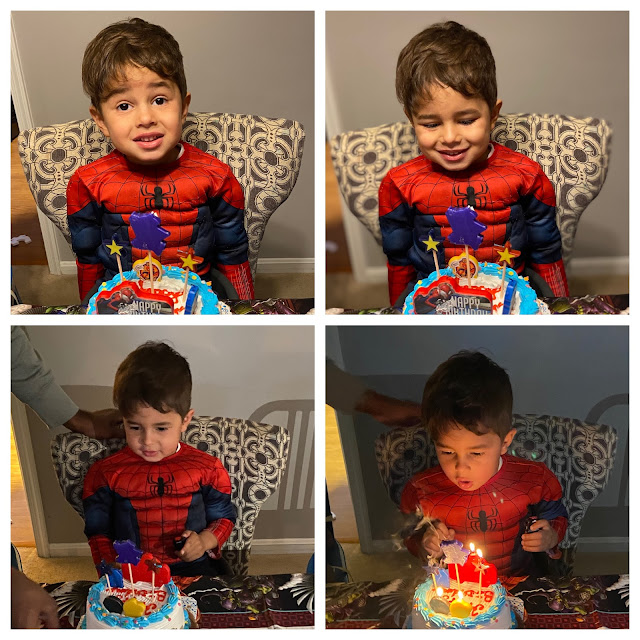 Cake and singing and blessings
for this very special little guy.
Three is gonna be awesome!!
Posted by Constance at 3/17/2021 10:08:00 PM No comments:

Worship into the Week- Boast in the Lord 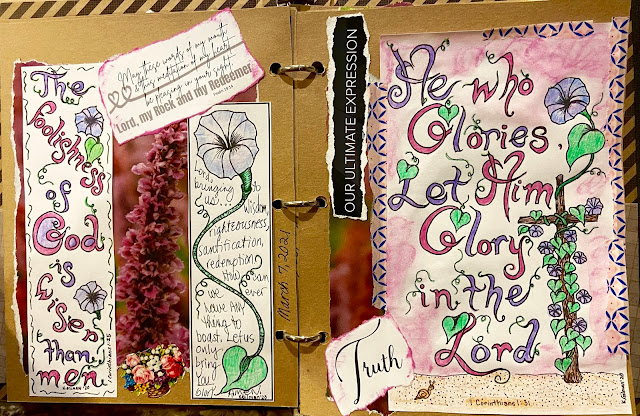 Worship into the Week-
Christ the Wisdom and Power of God
1 Corinthinans 1:18-31
The cross was a challenging issue
for both the Jews and the Greeks (Gentiles).
Paul worked among both while living in Corinth.
"For the word of the cross is folly
to those who are perishing,
but to us who are being saved it is the power of God."
The Jews thought the cross appeared to be weakness,
and the Greeks thought it was foolish, not wisdom.
Paul speaks to the congregation and reminds them
that they are not people of privilege, wield power,
or have vast influence.
The growth of the church did not depend on
them having education, riches or connections.
God was able to do what He needed
with just ordinary people.
It is God's gifts to His people, not diplomas or credentials,
that bring value to our work in the Kingdom.
We are nothing too special,
and can never treat others as unimportant.
Everything Paul was sharing upended the world's economy.
Nothing was as it seemed.
Nothing is gained to follow puffed up human leaders.
Where is the power?
It is God's doing that unites people to Christ.
v.30-wisdom comes from God, as well as righteousness,
sanctification and redemption.
We bring nothing to the table.
Human leaders seeking to be self-important
actually get in the way of the Gospel.
And this section ends with a notice-
beware of human leaders who boast in themselves.
We are to boast only in the Lord Jesus Christ.
Supplies:
Worship into the Week
children-s-bulletin-1-corinthians-1-18-31-3-7-21
Visual Church Year Printables
Magazine Cutouts
Gelato
Washi Tape
Colored pencils
Fine-point Sharpie 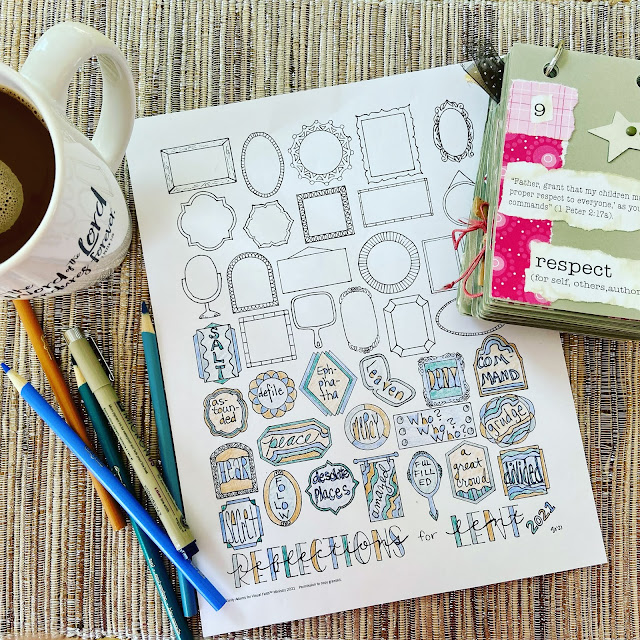 Just checking in on the
Lenten calendar Journey.
A take away from my Lenten devotion
each day.
A snippet to track the story.
Wondering what this will
LOOK LIKE
by Easter.
Calendar by Emily Adams.
Download Here from
Visual Faith Ministry
lenten-path-2021-by-emily-adams
Posted by Constance at 3/09/2021 11:50:00 PM No comments:

Worship into the Week- Hope Poured Worship into the Week-
Romans 5:1-11
Peace with God Through Faith
Faith surrounds us in so many ways.
We are justified by faith.
Faith brings us peace with God.
We stand in grace by faith.
We rejoice in hope of the glory of God.
We rejoice in our sufferings because
"suffering produces endurance,
and endurance produces character,
and character produces hope and hope
does not put us to share because God's love
has been poured into our hearts
through the Holy Spirit who has been given to us."
God shows us such great love.
There is a plan to this earthly journey
and we are so blessed
by this great love that changes everything.
In this great gift
we truly do have HOPE.
Supplies:
Visual Church Year Printable
children-s-bulletin-romans-5-5-2-28-21
and Worship Resource
Magazine Cutouts
Alpha letters
Washi tape 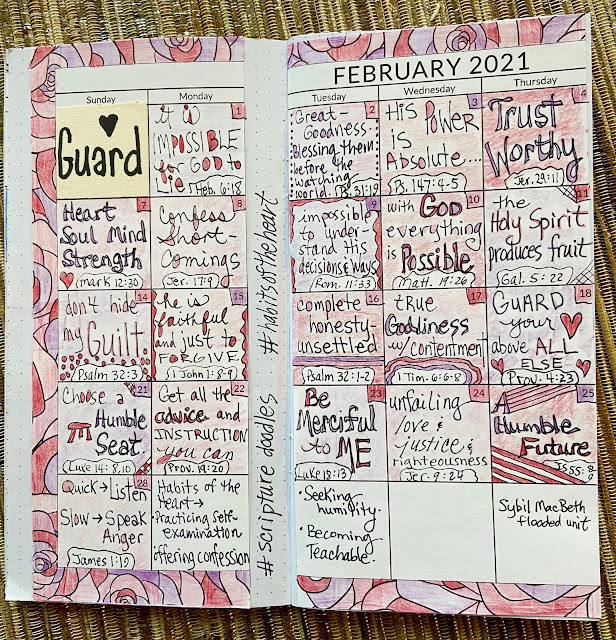 One Word or phrase from each day's

At the end of this month and a prayerful review -

my summary for the month is: 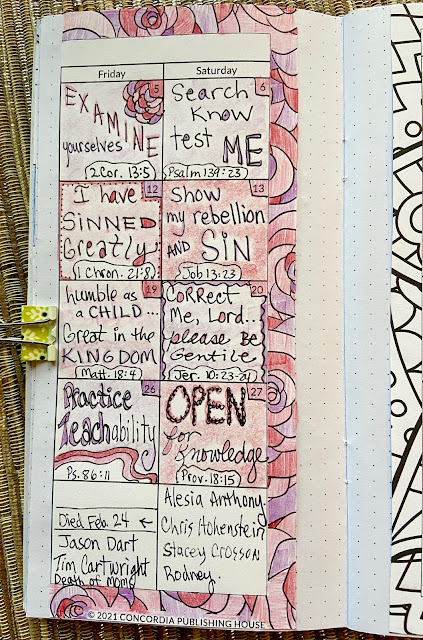 That is simple enough for me to walk

into March with a concrete focus.

It is the dailyness of this practice that calls to me.

It is the grace of the practice in the

ins and outs of discipled living that keeps me

coming back to sit down before a tiny square.

It is truly the story of God's faithfulness-

His creating a big impact

from something so small. 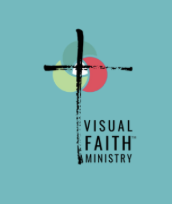